This text was once a letter sent to a breeder friend. I would like to share these thoughts about the responsibility of choosing to work with a natural breed such as Siberians. 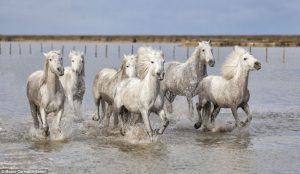 Dear friend, I am wondering if you like horses and if you ever heard about “Camargue” horses?

The Camargue is a breed of small rustic horse in a grey dress, from the homonymous region, south of France in the Rhône delta, on the Gard and Bouches-du-Rhône . This horse traditionally lives in freedom in its original marsh and its genealogy remains mysterious, although it is considered one of the oldest breeds in the world.
Mentioned from Roman antiquity and compared to horses we see on Lascaux paintings: The French palaeontologist Vera Eisenmann believes that this race could be «a relic of prehistoric wild horses. ».
Camargue horses live mostly in freedom and sometimes are used by men with working purposes but most time released back at the “marais” after the work is done.
These horses developed certain characteristics along the years to live and thrive on the Camargue marais: Its stature and morphology, its particularly resistant hooves adapted for life at the marais.
Camargue people are very proud of their small, strong saddle horse and all attempts of mixing the breed with the purpose of making it “taller” were discouraged and discontinued by “Les Haras nationaux” and Camargue horses are one of the symbols of the region.
The only colouring accepted for Camargue horses is GREY because it is the original coloring of the horses in their natural state and habitat.

I am certain there might have been crosses here and there now and then: farmers who own other breeds, also sorcerer apprentices who wanted to see the result of a certain match and even accidental mating with other breeds that were brought in to the area by men. I am sure we can find in the region that odd brown Camargue looking like horse, most likely in a stable, result from one of those eventual matings.
With human influence and sometimes even under the influence of “Mother Nature” with spontaneous mutations  several changes and possibilities become then possible (i.e. albino animals, alopecia etc)
It doesn’t mean that these changes should be encouraged, cultivated or bred, especially if this mutation express a form of “handicap”.

The definition of  “natural breed” or “native breed” :  population of native animals that are the product of a spontaneous selection in isolated areas, bearing common phenotype.

Breeding horses is a very complex affair and working with a NATURAL breed even more complicated. Camargue horses could be wiped off the map very easily! It is very important to watch over their genetic pool and preserve their natural characteristics i.e. Preserve their genotype and phenotype.
We all appreciate equine beauty and grace, but breeding in my opinion is not only about aesthetic factors like colors and patterns. Colors and patterns are the least important point in a serious breeding program.
A black and white, spotted Camargue? An Appaloosa looking Camargue?  I am not a horse expert, but the Appaloosa pattern is  a complex mix of breeds and color patterns
Obviously, Appaloosa horse genes (and pattern) are most definitely not from this very French area of the globe.

Taking in consideration only looks, some people might think this mix would look lovely but to obtain such horses sacrifices would have to be made. We are talking here about sacrificing the Camargue genetic pool. Would it be worth it, especially when there are already other breeds with similar looks (Appaloosa)?
Imagine this: there are Appaloosa horses brought into Camargue and left wandering in the land and farms. We notice some spotted little ponies around.
Less educated or careless (irresponsible) Camargue farmers/breeders might think it is a great idea to make more of these ponies, especially if there is demand and other countries are ready to pay good money for them! Let’s create Carmagloosa and try to have it accepted as a Camargue horse, a variety of Camargue horse or perhaps a sister breed.

To work with a natural breed, responsibility and a scientific approach is needed. Do you want to see real Camargue horses walking about in the marais in 20 years? Make sure the generations to come can also appreciate its grey beauty galloping on Camargue? If you answer is “yes”, then the genetic pool must be preserved otherwise you will leave for the generations to come, a horse that is “kind of what” used to be a Camargue horse”.

The Camargue is a “Pearl”, a national treasure in France as the Siberian cat should have been seen and treated by Russians, as national treasure.  Unfortunately this is far from being what happened (happens) there.

The point is that horses are horses (cats are cats). If nothing is changed by human hand, Camargue horses will continue to be grey and sturdy for long years ahead.

When talking about mankind, it is a totally different matter. It is a mistake to make a parallel between men and animals. Men have feelings, dreams, we love, we have the ability of making our own choices, we travel, we move.

Animals that belong to certain regions in the globe, developed certain characteristics because of the area and its way of life and we can even talk about the ecosystem they evolved in,will remain unchanged if there are no major external  interference.
If  man decide to breed and select using these individuals (for any reason), why to do so if there is no intent to preserve the live stock and their gene pool?  A tom cat (or a Camargue stud) will be happy mating with any healthy female no matter what color, pattern or shape. It is our role to select the right matches, right individuals in order to preserve the breed and its gene pool.

Preserving natural breeds is a bit like preserving the gifts nature crafted for us in these specific, sometimes remote areas of the globe and it also means preserving the cultural background of people who live in these areas.
I have several Russian friends, some not even related to cat breeding, saying that the Siberians they see now have nothing in common with the cats they used to see and grew up with. It does make me feel sad that the Siberian cat was somehow “lost in translation” in their own birth country.