I have been studying nem for some time now and trying to put myself in the shoes of a nem breeder or nem mixer.  I was going to say that nothing better than to understand your enemy. But the thing is that nem is not exactly the enemy the real enemy is a mix between IGNORANCE and Greed.
So basically in nem/Siberian world: nem makes the world go round and Siberian makes the ride worthwhile.

Here is in a few words what happned then and what still happens NOW.

As described by Olga Mironova, who was one of the founders of Kotofei club, nem was man created step by step with cats they had available.

Some Moscow traditional breeders share this belief that Siberians are actually a big mix of several types of cats and breeds.

Here is what one of them said in a recent FB left by a mixer.

“The siberian is a Russian street cat which the breeders decided to named as Siberian, they wrote the standart, they recognized this breed and…there were “tradional” and siberian colourpoint at the same time.”

It sums their vision of the breed. Not to mention nem does very well at shows too! Cat judges love hair and fluff and nem are good looking fluffy cats.

Some of these breeders know perfectly well that cp pattern mutation is not natural in Russia.  In fact the only natural CP cat is Siamese. But they need to  justify themselves and they like to use the following argument in their “defense”:

Golden, silver and marble pattern are not natural to Siberian either and you accept it as natural.

They are comparing the difusion of these three tabby patterns in forest cats like Norvegien, Maine Coon and Siberians that occurred gradually throughout western/eastern Europe in a very large time frame to the mixing Siberians to a totally different breed like Siamese in order to obtain a certain look. It is most definitely NOT the same thing.
There is a theory the Siberian cat is the origin of LH mutation. Siberians are also the first natural breed before Norwergians and Maine Coon.

Regarding silver and golden the first thing to note is that there will be different types of silver and golden out there. You will find the ones result from the “all in one breed” created by nem people and sorcerers apprentices who probably mixed Siberians to Persian again to get a certain look, enhance silver and golden.

SILVER is a natural, dominant  mutation in these cats and I spent long hours of my time going through Roy Robinson’s data regarding the silver mutation and any other publications and it is certain that silver is natural mutation that appeared EXACLY in forest cats to start.
Extract from Roy Robinson’s book  and Lyons Feline genetic Laboratory web site.
Silver (a.k.a. Inhibitor (I,i)) appears to reduce or eliminate the production of pheomelanin or yellow pigment in the cat’s hair. Generally considered a dominant trait, one copy can cause the loss of pigment, but likely a cat with two copies of the mutation may have less “ruffusing” or “tarnishing” as well. On a tabby cat, the black banding will appear but the yellow bands are devoid of coloration. (Figure 1) Silver is seen in random bred cats and may be a very ancient mutation, pre-dating the development of breeds and the cat fancy. Many argue as to whether there may be a second – recessive type of silver mutation. I personally do not think this should be ruled out until we prove otherwise, but I think the majority of evidence (or cats) is for a single dominant mutation. There may be more than one mutation, we will see! Cats that are non-agouti (aa) and are solid, will appear as smokes, with white at the base of the hair when they have the silver mutation. Silver is a novel gene in cats, all the genes that cause silver colorations in other species have been eliminated as the cause.

Golden is a bit of a tricky matter to me but I trust the work of Alexander Kolesnikov who explained how this mutation is seen naturaly in Siberians and Kurillan cats.

The nem situation is like an spiral that has it origins not in Russia but in Europe and USA where most pet kittens are sold.
Let’s take France as example:
There are SEVERAL nem breeders and mixers and pet homes LOVE nem because it looks so much like Birman that is very popular in France, so all these allergic pet homes that cannot have a Birman, go towards nem and since the ONLY cat club we have in France accepts nem and Siberian as one breed, all these people think they are buying a Siberian.
Among the breeders we have here: some only care about sales and if it sells who cares about these details. Some believe in any story they are told and it goes from rat invasions to “if  Mr. Pallas saw a colourpoint cat there, they must be natural” and finally we also have the ones who think Siberians are the “all in one” cat made by several crosses.
These people buy the nem produced in Russia and the machine goes on.


Building this site made me realize one thing:

Most of older and newer Russian breeders who actually had the pleasure of meeting and living with a real Siberian, remained traditional breeders (of course there are exceptions) and they put as much effort as we do here in Europe to find the right cats, research, trips etc.

I could mention several names here but I don’t want to be accused of favoring some and not others etc but if you think I should I will with pleasure (addressing to group members).

On the other side of the NEM MARKET SPIRAL, we have these Russian and Europeans breeders who could grasp the essence of Siberian cats and see the breed under a totally different light.  We have facts and we know cp pattern mutation do not belong in the gene pool of these cats we love. Alexander Kolesnikov helped to define Siberian genotype and phenotype and we are left in the middle of an colossal and very well establish cat market and it may feel sometimes like we are in a hunt carrying very few weapons and no dog.
If we had managed to separate the breeds, things would have been totally different because the co-habitation would have been possible.  The way things are headed now, in a very short period of time all the bloodlines will be mixed and the crazy amount of new foundation cats brought in (with very little information given)  by new breeders who also sell cats to new breeders, will not help the situation.

This is why I give so much of my time: to this project and I have reason to believe that together we have a shot to get these lines going to give a chance to others in the future to have the choices we still have now.  YOUNG people are open minded and very DATA oriented, they want facts, people want to go back to the source and roots and there is a very good chance that in the future, things could change if people with these type of approach  come to us in larger numbers:  Young people like Marie Andree Gagnon, Clare Ferris, Amanda Hedren, Genevieve Malenfant. Olga Zaharova (who is a young yet experienced Siberian breeder) Caitlin Esparza, Petra Kettle , Cecile Marjollet (another young but experienced breeder)  and  many others. Thankfully we are now so many that would be impossible to mention everyone here. These determined ladies and gents guided by breeders like Onofre Martinez, Alexander Kolesnikov, Maria Pavlovsky. Merja Tolonen, Barbara Bourenkov, Ilse Schwender, means we have here a very good clear shot.

Here is an old photo taken back in 1965 and shared byMarina Zamyatina, cattery “Sibirskiy Dvor” 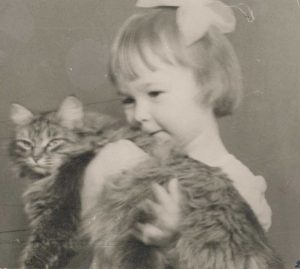